Mary Bucci Bush’s new novel, Sweet Hope, about Italians and African Americans living and working together on a Mississippi Delta cotton plantation 1901-1906 will be published by Guernica Editions in fall 2011. Her book of short stories, A Place of Light (Morrow 1990), winner of a PEN/ Nelson Algren award for a work-in-progress, was republished by Guernica Editions in 2007. Her stories and novel chapters have appeared in such journals as The Missouri Review, Ploughshares, VIA (Voices in Italian Americana), The Black Warrior Review, Italian Americana, and Story. Her fiction has appeared in several anthologies, including Growing Up Ethnic in America (Penguin), From the Margin: Writings in Italian Americana (Purdue University Press), The Voices We Carry: Recent Italian/American Women’s Fiction (Guernica) and The Milk of Almonds: Italian American Women Writers on Food and Culture (Feminist Press). She is a past recipient of a National Endowment for the Arts Creative Writers Fellowship as well as other awards, and currently teaches English and creative writing at California State University, Los Angeles.

In Her Own Words

When I started teaching at California State University Los Angeles after positions as visiting professor at Hamilton College and Hobart & William Smith Colleges in New York State, and then the University of Memphis (then Memphis State) in their newly formed MFA Program in Creative Writing, I felt like I had “come home.” I was and still am impressed by the vibrant writing life in the city and on campus, and by the inquisitiveness, creativeness, and enthusiasm of the students here. I have probably learned as much from my students as they have from me.

Teaching creative writing in general, and fiction writing in particular (primarily the short story, but also the novel), are my specialties. I’ve also had the good fortune to be able to teach a number of undergraduate and graduate literature classes, mostly of my own design. A few favorites of mine are Literature & Film; Apocalyptic and Post-Apocalyptic Fiction; Advanced Fiction Writing: Your Stories Adapted to Film; and Freshman Composition with a focus on new ways of thinking about the family, gender and sexuality, and class in America.

It’s hard to live in Los Angeles without being bitten by the film bug. I’ve tried my hand at screenwriting (who hasn’t out here?), and have learned and continue to learn a great deal about film and adapting literature to film. I’ve had some wonderful people “in the business” attend some of my classes as guest lecturers: my own colleagues Melvin Donalson on adapting his work to film (and showing us clips of the finished product); another colleague Kristiina Hackel speaking on her experiences in adapting a Katherine Mansfield short story to film; Bob Jackson giving us a riveting, terrific introduction to sound editing; Montserrat Fontes speaking about her fiction writing and adaptation experiences with her novel First Confession; and actor, writer, director, announcer on the Ellen show (and beloved cousin) Paul Bartholomew talk about all those aspects after showing his very popular short film Idiot Actor Syndrome (now available for viewing on YouTube).

As a teacher, I see my role as one of facilitator or guide to what all of us—myself included—will experience and learn in the classroom. I expect and encourage students to take a proactive role in their education. My vision of the perfect classroom is one in which each of us takes the initiative to read and explore ideas outside the assignments, to make connections between our scholarly or life experiences and the subject at hand, and to bring to class those fresh ideas and insights. Those students who share with the class their exciting discoveries shine a light on all our learning and on the overall classroom experience.

As a longtime past faculty advisor for our student literary and art journal, Statement, I am committed to supporting the magazine, the students who work on it, and those who are published in it. After more than 60 years of publishing on the Cal State L.A. campus, Statement magazine is still going strong. Check it out: http://www.calstatela.edu/academic/english/sthome.php

I spent a long time researching the illegal importation of Italians to the Mississippi Delta 1898-1910 in order to write my novel Sweet Hope inspired by my grandmother’s childhood experiences. “It was a hell,” she used to tell me. “A wild, wild place. Why you gotta make me remember?” Italians were held in peonage while the few remaining African American sharecroppers on Sunnyside Plantation appeared to the Italians—who knew nothing of color or race in America—simply as darker-skinned Americans. The novel looks at the friendship between one Italian and one African American family and the bitter truths they learn about race relations in America. Chapters from Sweet Hope have been published in several literary journals and anthologies. Currently I am researching African American experiences during WW II in Italy and then, post-war, in the Mississippi Delta and Los Angeles. The WW II research is preparation for the new novel I am working on, Chall, a sequel to my novel, Sweet Hope. I continue to explore African American and Italian relationships, 1900 to the present, in an attempt to understand the constructions of race and “color” in America—and how some interracial friendships or love relationships endured in the face of segregation and racism. Connected to this topic is my ongoing interest in how Italians, at first considered a “third race” in this country (as were some other European immigrants), “became white.” 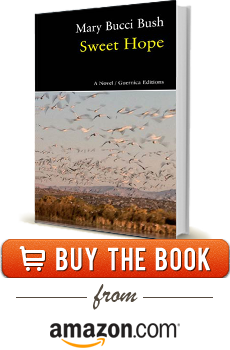